China Recognised as a Territorial Organisation

The National President of China, Professor Wang Derong, and fellow members of the China Council were welcomed to the stage at International Convention to commemorate their appointment as a Territorial Organisation of The Chartered Institute of Logistics and Transport. Also present were industry partners of CILT China who joined delegates in Dubai. The CILT has been established in China for years and all that time has been led by a partnership with CCTA.

President Elect, Kevin Byrne, explained that the journey from International Branch to Territorial Organisation is significant as becoming a territory gives both benefits and obligations. In Birmingham in 2012 we announced the awarding of Territory status to Sri Lanka. Sri Lanka was the first country to become a territory since the merger of the CIT with IOL in 1999 / 2000. In 2014 we recognised Nigeria as our first African territory. The award to China was made formally from January 1st 2015 and was recognised at the China Conference in April.

As we gather as a complete International family at this Convention it is appropriate to recognise the achievement of CILT China.Over the past three years we have been building a closer relationship with CILT China to help grow education and membership in such an important country where logistics and transport opportunities are huge 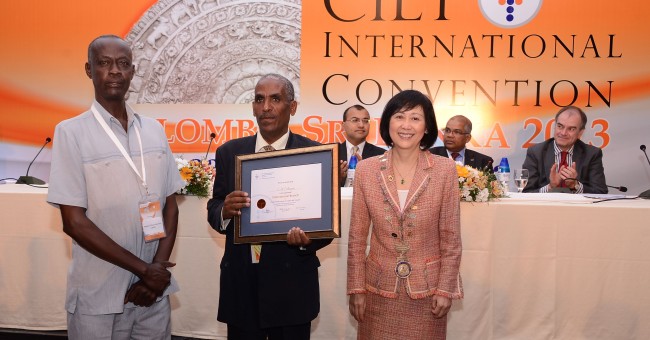