The Bright Path from the East to the West

One of the most significant events at this year’s CILT International Convention in Macao was the inauguration of CILT Kazakhstan, the 34th member of our global family. The culmination of several years’ hard work and careful planning working closely with the Kazakh Academy of Transport and Communication (KazATC), the launch comes at a time of great change both in the Republic of Kazakhstan and the world. In order to understand the importance of Kazakhstan to the future of world logistics, and the opportunities and challenges that lie ahead for CILT Kazakhstan, it is essential to understand something of the country itself.

Kazakhstan is a remarkable place. A vast swathe of land equivalent in size to Western Europe and stretching from an eastern border with China across Asia to the western side of the Ural mountains and the outskirts of Europe. Since declaring independence in 1991 it has grown to become the dominant economy in Central Asia, extracting and exporting a wealth of natural resources including oil, natural gas, uranium, zinc, lead and copper, as well as coal, iron and gold. It is perhaps Kazakhstan’s strategic position that is its most valuable natural resource. With borders near to both the great manufacturing bases of the East and the large markets of the West, Kazakhstan is well placed to become one of the strongest links in the global logistics network.

In December 2012, Kazakh President Nursultan Nazarbayev announced the ‘Kazakhstan 2050 Strategy’ with the slogan ‘Strong Business, Strong State’. This strategy proposes sweeping socio-economic and political reforms designed to move Kazakhstan into the top 30 economies by 2050. Amongst the reforms were a series of five year plans aimed at developing Kazakhstan’s capacity to design, manufacture and export cars, aircraft, locomotives and carriages for both passengers and cargo. Then in November 2014, President Nazarbayev delivered an unexpected state-of-the-nation address in Astana at an extended session of the Political Council of the Nur Otan party, introducing the ‘Nurly Zhol’ or ‘Bright Path’ policy.

‘Nurly Zhol’ is a $9 billion domestic economic stimulus plan to develop and modernize roads, railways, ports, IT infrastructure, education and civil services in the Republic of Kazakhstan. At the heart of this endeavour is the Kazakh national logistics company, National Company Kazakhstan Temir Zholy (NCKTZ), the repositioning of Kazakhstan as a country of logistics excellence, and the creation and refinement of the New Eurasian Land Bridge, a rail link running from Lianyungang in Eastern China through Kazakhstan, and on to a European destination such as the Dutch City of Rotterdam, a distance of approximately 11,870 kilometres.

The Kazakh Academy of Transport and Communication is an integral part of both the future of NCKTZ and the success of Nurly Zhol. Created in May in 1996 by merging two transport universities, Almaty Railway Transport University and Almaty Road Transport University, KazATC was renamed in 2000 in honour of Mr Mukhamedzhan Tynyshpayev, a key figure in the construction of the Turkestan – Siberian railway. In 2013 NCKTZ and KazATC created the partnership that continues to drive the Kazakh logistics revolution. By working closely together, the two institutions aim to ensure the supply of highly trained human resources needed to support the new infrastructure being created by Nurly Zhol.

It is this need that makes CILT and KazATC perfect partners. In the words of Dr Nurlan Igembayev, Dean of the Logistics and Management Faculty at KazATC and the man who would go on to become the first President of CILT Kazakhstan,

We have reached a new stage in the development of the country…and now require the presence of highly qualified human resources. In this regard, and in consideration of the human resource strategy of NCKTZ, we wanted to create a branch of the Chartered Institute of Logistics and Transport in Kazakhstan.

In 2016 International Professional Development Co-ordinator Jon Harris travelled to Kazakhstan to meet with President-Rector Kuanyshev Muhanbetovich and Dr Nurlan Igembayev, Dean of the Logistics and Management Faculty, to discuss becoming a training provider. Accreditation of KazATC soon followed, and in 2017 President-Rector Muhanbetovich and Dr Igembayev travelled to the UK and met Secretary General Keith Newton, this time to discuss the possibility of creating CILT Kazakhstan. During a return visit which also included a tour of manufacturing and educational facilities in Almaty and Astana, Mr Newton met with President-Rector Muhanbetovich, Dr Igembayev and Vice-president of NCKTZ Mr Erik Imashev to discuss the ongoing human resource and training challenges facing KazATC, NCKTZ and Nurly Zhol. The outcome was a decision to apply for branch status and create CILT Kazakhstan. After successfully completing the application process, and with the final approval of the trustees, CILT Kazakhstan was inaugurated at a ceremony during CILT International Convention 2017 in Macao, with Dr Igembayev as President.

The reawakening of the Silk Road has long been a part of President Nazarbayev’s vision for Kazakhstan’s future. The current scale of work is the result of careful planning dating back to Kazakhstan’s independence in 1991, and key reforms made throughout the subsequent decades. Trials by Hewlett-Packard in the early 2000s demonstrated the viability of a rail route across Eurasia, and since that time rail infrastructure and logistics infrastructure as a whole has significantly improved. New high-speed rail links are being built across Kazakhstan and the construction of transport and logistics centres in nine key cities and the ‘Khorgos – Eastern Gate’ dry port and special economic zone on the border with China has been complemented by the creation of the Eurasian Customs Union and an economic environment conducive to foreign investment. As a result of these changes the Kazakh government forecasts that rail freight from western China through Kazakhstan to Europe will grow to 7.5 million 40-foot containers by 2020, up from just 2,500 transported in 2012.

When asked about the future the new CILT Kazakhstan President is optimistic.

He also points to the Kazakh government’s continued support of the industry, the partnership with NCKTZ and the desire to become the bridge between the East and the West.

We have everything, highly qualified trainers, excellent training facilities and laboratories…excellent relations with foreign national companies through consultancy work…and access to a large internal market through NCKTZ.

He is not exaggerating. The current employment roll at NCKTZ and its subsidiaries is approximately 136,000. In the short term Dr Igembayev advocates a slow and steady approach.

First of all we want to focus on education and training…then we will focus on increasing membership. We need to first deliver the high quality education and build awareness of the value of CILT qualifications

This same optimism is evident when to talking to Secretary General Keith Newton, “It is a great time to create a branch of CILT in Kazakhstan, and the Kazakh Academy of Transport and Communication is an excellent institution, more than capable of delivering the world class learning that makes CILT what it is today…we have been very impressed with [Dr Igembayev] and the team at CILT Kazakhstan. We share the same ideals, and look forward to a strong and prosperous future together.”

Read more about Kazakhstan’s role in the development of One Belt, One Road in KazATC President-Rector Bakytzhan Mukhanbetovich’s presentation at this year’s International Convention.

The Role of Kazakhstan in the Development of the Programme 'One Belt and One Road'. from Chartered Institute of Logistics and Transport (International)
Next Story
News
Driving the Future 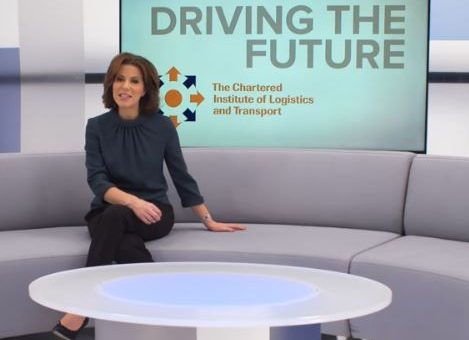 Home • News • The Bright Path from the East to the West