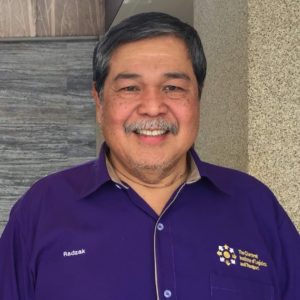 I believe in inclusive leadership, the democratization of education, internationalist corporate culture, and regionalisation as a tool to strengthen collaboration throughout continents. In this regard, CILT stands out to me as the only professional, forward-looking organisation in global logistics, transport and supply chain. Stronger Together.

I am truly honoured to be President Elect of the Chartered Institute of Logistics and Transport, serving from 2018 to 2019. During my term I will focus on several key areas, including the Young Professionals network, Women in Logistics and Transport (WiLAT), our Regional Forums and the impact of Industrial Revolution 4.0.

I was appointed a Chartered Fellow in July 2004, and have served as the President of CILT Malaysia from 2004 to 2008, and again from 2010 until the present. During this time I have held several portfolios including as the Chairman of Membership & Corporate Affairs, Senior Members Networking, and CILT Venture Sdn Bhd. In 2012 I was appointed an International Vice President of the Institute, a position I continue to hold.

In 2008, during my tenure as the Managing Director of KTMB, I launched a transformation to turn around the company. The target was RM1 profit, and we were able to generate RM1Million per week through revenue enhancement and cost cutting. Working on projects of this size has given me a better understanding of organisational change and the importance of everyone working together, experience I will bring to my role as President Elect.

I am currently the President of the Malaysian Services Provider Confederation (MSPC),   and hold several other posts in the transport and logistics fraternity, including being appointed a Board Member of the Malaysian Professional Centre (BIM), the umbrella body for all professional bodies, created through legislation by the Parliament of Malaysia.

As President Elect, I will draw on my experiences as a logistician and an administrator to help guide our Institute through the challenges and changes of the next hundred years.